How to get to…

How to get to…

The Tri-city has a well-developed public transport system. Here, only the basics of the system are described. Each city has its own network of public transport. Tickets can be bought at kiosks and in some cities from drivers of buses, trams and trolleybuses. Usually, you also need a ticket for your luggage. Tickets must be punched just after you get on a bus, tram or trolleybus. A valid ISIC card entitles you to reduced-price tickets (up to the age of 26). For details you should consult the fare regulations issued by a given city. Depending on the city, buses, trams and trolleys operate from 4 a.m. to 11 p.m.; there are also night lines operating between 10 p.m. and 4 a.m. However, whenever you travel late at night, we would advise you to take a taxi. Usually, it is cheaper if you order a taxi by phone.

The development of the Tri-city was eased by the construction of the city train (SKM) from 1951, linking the whole area from Tczew through Gdańsk and Sopot in 1953, then Gdynia in 1956, Reda, Rumia to Wejherowo in 1957.

The backbone of the Tri-city is the inner highway. It starts in Gdańsk and goes through Sopot, Gdynia, Rumia and Reda to Wejherowo. It consists of 2-4 lanes in each direction.

In 1975 the dual carriageway Tri-city Bypass (Obwodnica Trójmiejska) was constructed. It starts in the vicinity of Pruszcz Gdański and goes through the western districts of Gdańsk to Gdynia-Chylonia.

There is a plan to build a new line of the Szybka Kolej Miejska (SKM) to connect the Baltic Arena with Gdańsk Lech Wałęsa Airport. The line should be ready for the 2012 Euro games. 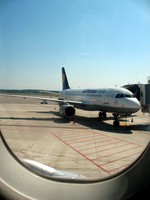 Gdańsk Lech Wałęsa Airport is one of the three main Polish international airports. Its position is associated with a well-developed network of domestic and international transport connections provided in response to the growing demand for business and tourist travel.

Gdansk Airport is located a mere 10 km from the centre of Gdansk, about the same distance from the centre of Sopot and 23 km from the centre of Gdynia. The continually expanding road system which connects the airport with the city centres allows drivers to cover these distances in about 15-20 minutes. The close vicinity of the Tri-city bypass and junctions with state motorways nos. 1, 6 and 7 facilitates access from areas outside the Tri-city. The convenient location of the airport makes it easy for travellers and cargo carriers to transfer from air to road, and also to the railway network and seaports. Gdansk Lech Walesa Airport has its own railway siding which can be used for handling large shipments of cargo dispatched by air.

The efficient Gdansk Airport operates even the biggest planes and enables thousands of tourists to visit the Pomerania province every day. Visitors can find a bus that will take them to the city centre from just in front of the main entrance to the passenger terminal. They may also choose to take a taxi, which will take them wherever they want to go in the area of the Tri-City for a relatively small price.

Getting to the airport by bus

The variety and number of connections makes travel around the Tri-City and surrounding areas very easy. One of the most popular means of transport in the Pomerania province is the public bus. There are a great number of bus lines and they cover every district of the three cities of the metropolis.

Municipal Railway (SKM) www.skm.pkp.pl
This is an excellent means of transport for short trips across the Tri-City. The network provides easy access to most districts of northern Gdańsk, Sopot and Gdynia. Tickets can be bought only at the Ticket Office at every station and must be stamped before entering the train in the yellow stamping machine on the platform. Late in the evening tickets are available directly from the ticket inspector at the head of the train. A discount (37%) student ticket is valid only with a student card (to be shown during ticket control).

Tram (Tramwaj) www.zkm.pl
This is the most popular means of transport in Gdańsk. The network provides excellent links between the north and south of the city. Moreover, its lines reach most districts. Tickets for trams and buses in Gdańsk are priced according to the length of travel time they offer. The basic ticket is valid for a 10-minute journey; its multiple allows longer travel (for details see the table on the side). Switching trams or buses is allowed unless the time has expired. Therefore, for longer trips it is better to buy a ticket valid for the whole day (5 times the price). Tickets can be bought in every kiosk. Moreover, the tram driver sells a set of 3 basic tickets. Students have the right to use half-price tickets, yet a student card is requested during ticket control.

Buses (Autobus) www.zkm.pl
Buses are the main means of transport to more distant districts and the suburbs of Gdańsk, Sopot and Gdynia. At night (from midnight up to 4 a.m.) they are the only means of public transport available (note: special night fare).Gdynia has its own tickets and therefore, it is impossible to use Gdańsk time-tickets there. Moreover, in Gdynia there is no distinction in the value of the ticket as far as the time of travel is concerned. Each stamped ticket is valid for a single journey only. Students have the right to use half-price tickets (again student cards are requested). Trolley-buses support the public transport network of Gdynia. The fare is the same as for buses. In Sopot, both Gdynia and Gdańsk tickets are valid, although the fares might differ. Only in buses going to Gdańsk is it necessary to use time-tickets (for details see Trams). On other routes each punched ticket is valid for a single ride.

Taxi
A taxi is the best solution when returning from late-night parties. It is not too expensive (from Sopot to the dorm about 30 zł, from the Old Town 15 zł). When taking a taxi, it is better to phone one than to take one from a taxi rank – you get a cheaper rate.