A group of scientists from the Medical University of Gdańsk, Gdańsk University of Technology and the University of Gdańsk have patented a new method of creating and delivering proteins to the body. The invention will help people with difficult-to-heal wounds and other skin ailments. Currently, in Poland, this problem affects 100,000 patients. The factors causing the formation of difficult-to-heal wounds are civilization diseases, e.g. diabetes, obesity and the progressive aging of the population and the age-related decline in the regenerative abilities of the organism.

The subject of the patent are multiplicating-expression vectors. It is a way of creating and delivering multi-signal proteins to a place in the body that undergoes regeneration. Thanks to this, multisignal proteins placed e.g. in a wound can directly stimulate the tissue regeneration process or gradually release biologically active peptides. The creators of the solution plan to apply it to the construction of new generation biological drugs. The use of the latest achievements in biotechnology and molecular biology allowed researchers to explore the mechanisms of tissue regeneration and the action of new compounds with healing potential. 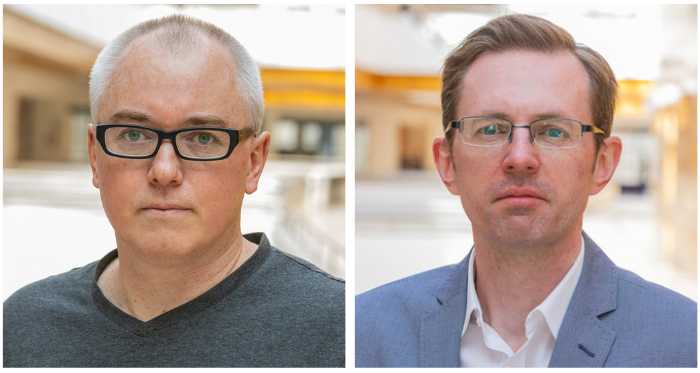 from the left: Prof. Arkadiusz Piotrowski and Prof. Michał Pikuła

Work on the invention was financed by the National Centre for Research and Development as part of the STRATEGMED1 program of the REGENNOVA grant Nowe technologie farmakologicznej stymulacji regeneracji (STRATEGMED1/235077/9/NCBR/2014), implemented in 2014-2018. Work on the patent was carried out together with researchers from the University of Gdańsk, Gdańsk University of Technology, and the Nencki Institute of Experimental Biology, Polish Academy of Sciences and two biotechnology companies PRO SCIENCE Polska sp. Z o.o and MedVentures sp.z o.o. The head of the REGENNOVA consortium is Prof. Sylwia Rodziewicz-Motowidło (Faculty of Chemistry, University of Gdańsk). The leaders of the research groups at the Medical University of Gdańsk as part of the REGENNOVA project are Prof. Arkadiusz Piotrowski from the Department of Biology and Pharmaceutical Botany (genetic research) and Prof. Michał Pikuła from the Division of Embryology (in vitro regeneration research). Gdańsk University of Technology was represented in the project by Prof. Paweł Sachadyn from the Department of Microbiology.

The REGENNOVA project has developed a total of 11 inventions for the development of new compounds that stimulate tissue regeneration and wound healing, which have been submitted for protection to the relevant Patent Offices. A decision of the Office granting a patent has already been obtained for 7 inventions (6 patents of the Patent Office of the Republic of Poland and 1 patent of the European Patent Office).