StartUniversityNewsAcademic Year 2021/2022The MUG at the global foref...
News

StartUniversityNewsAcademic Year 2021/2022The MUG at the global foref...

The MUG at the global forefront

The Medical University has been again placed amongst the world’s best universities according to the Global 2000 List by the Center for World University Rankings and the Times Higher Education (THE) Impact Rankings 2022. 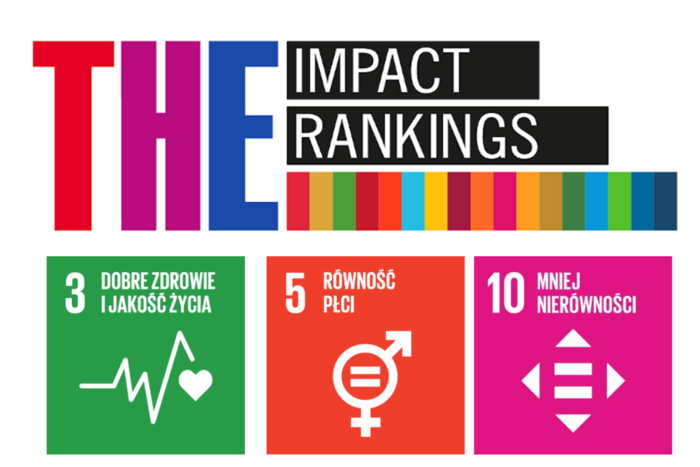 Times Higher Education (THE) Impact Rankings 2022 is the only rank evaluating universities with regard to achieving the SDGs (Sustainable Development Goals) of the United Nations. The MUG has been noted in the rank for the first time (position 800-1001) and as the only Polish medical university. Our University is amongst the group of 1406 world’s universities, while amongst 15 Polish higher schools took 6th place ex aequo with the Adam Mickiewicz University, Poznań, Silesian University of Technology, University of Wrocław, Wrocław University of Science and Technology and the Wrocław Univeristy of Environmental and Life Sciences. World’s first place took the Western Sydney University, and from the Polish academic centres – the University of Gdańsk.

The MUG obtained the highest grades in such SDGs as: Good Health and Well-Being (SDG3), where has been classified on 92nd position amongst over 1000 universities which implement the Goal. It had good result also in the SDG10 (Reduced Inequalities) i SDG5 (Gender Equality).

The rank’s results were announced on 27th of April 2022 in Stockholm during the official gala of the THE Innovation & Impact Summit 2022. Our University was represented by Adam Tuszyński from the Promotion Unit z Sekcji Promocji.

Full results are available at the Times Higher Education’s website.

Few days earlier, on 25th of April 2022 we also learned the results of the Global 2000 List by the Center for World University Rankings. This rank describes in detail 2 000 world’s best universities from 19 788 (including 40 Polish) taken into account by its authors. Our University took 1099th place in total, 14th in Poland as well as turned to be the best university in Gdańsk again.

The Global 2000 List by the Center for World University Rankings rank is created considering both didactical and scientifical activity of given unit. Total number of points consists of particular categories:

Full rank is available at the Center for World University Rankings.