Inauguration ceremony of the academic year 2021/2022

Over 1,600 first-year students began their studies at the Medical University of Gdańsk. The ceremonial meeting of the Senate inaugurating the academic year 2021/2022 was held on October 11 this year in the hybrid formula. Due to the epidemic situation, the event was organized in a smaller group and the whole thing was broadcasted through the university social media. This year’s ceremony was combined with the conferment of the Aesculapius Gedanensis dignity to Prof. Bolesław Rutkowski and the presentation of the Roman Kaliszan Prize and Medal to Prof. Marcin Kołaczkowski of the Jagiellonian University. The ceremony was honored by the presence of Minister of Health Adam Niedzielski, Deputy Minister of Health Piotr Bromber, Social Advisor to President Andrzej Duda Piotr Karczewski, as well as Radosław Sierpiński, Ph.D., plenipotentiary of the Prime Minister for the development of the biotechnology sector and Poland’s independence in the field of blood products, President of the Medical Research Agency. Also present were: Dariusz Drelich, Voivode of Pomerania, Agnieszka Kapała-Sokalska, Member of the Management Board of Pomerania Region, Aleksandra Dulkiewicz President of Gdańsk, and Monika Kasprzyk, Director of Pomerania Voivodeship Branch of the National Health Fund. 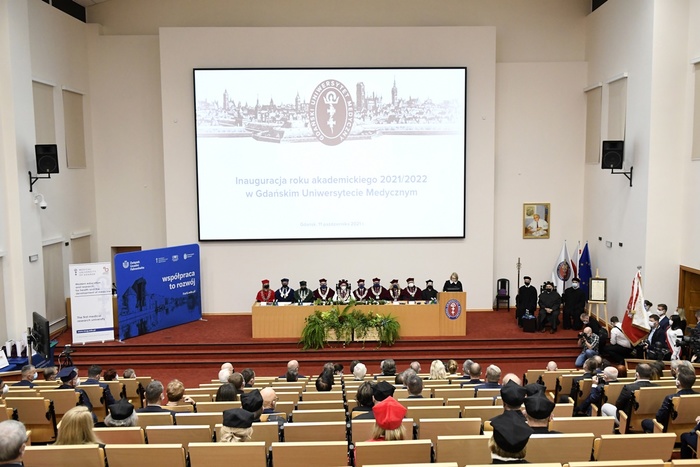 The ceremony began with the traditional Rector’s speech. In his speech, Prof. Marcin Gruchała announced, among other things, changes in the area of education, quality and way of teaching, as well as study programs.

– Thinking about modern science, we cannot forget about modern didactics and education that stimulates development. Our task should be to create an atmosphere friendly to young talents and their nurturing and professional development to ensure success in the world of modern medicine, science, and help for the sick – said Prof. Marcin Gruchała. – We should put more emphasis on the training of soft skills, empathy, and the ability to cooperate, referring to the best models in medical and non-medical environments.

As he noted, the Medical University of Gdansk is one of the best medical universities in Poland, with increasingly intense interdisciplinary research and a significant share of international cooperation. The University is characterized by a high scientific and development potential, which consists, among others, of recognized research teams, a growing number of prestigious publications and grants, as well as a wide range and quality of conducted research confirmed by high categorization of units. The Rector has announced the continuation of activities aimed at supporting scientific activity. 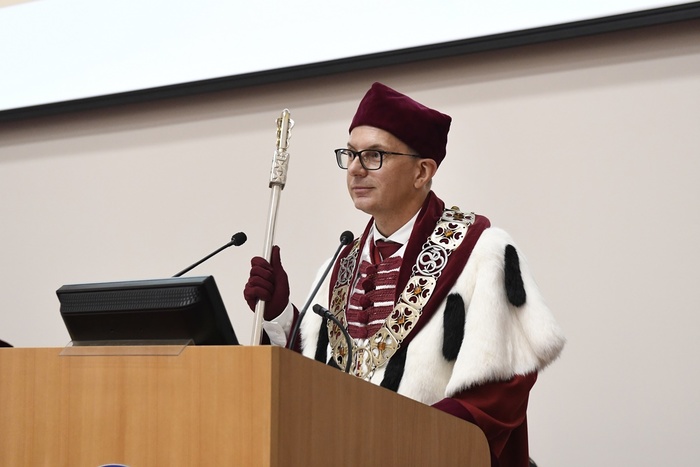 – We must not forget, however, that the basic element of our mission is to educate future generations of medical staff and properly prepare high-class health care specialists. This is a very responsible task for society, which we carry out well. We want the best graduates to start their studies at the Medical University of Gdansk, for whom studies and professional development will become a life passion. – added Rector Gruchała.

The Rector of the Medical University of Gdańsk stressed that modern medicine and the health care system pose enormous challenges for medical university graduates, which are associated with a constantly growing body of detailed specialist knowledge, dynamic technological progress, and also with an enormous workload due to the shortage of medical staff. Prof. Gruchała added that an opportunity for further development of the MUG is the establishment of the Fahrenheit Union of Universities in Gdańsk together with the Gdańsk University of Technology and the University of Gdańsk.

– Through joint activities we want to create in Pomerania not only a strong academic centre, but also an attractive place to work and study, offering scientists at every stage of their careers friendly conditions for development and fulfillment of their aspirations – explained Prof. Gruchała.

The Minister of Health, Adam Niedzielski, said that the new academic year inaugurated at the MUG is another one starting in the reality of the fight against pandemics. 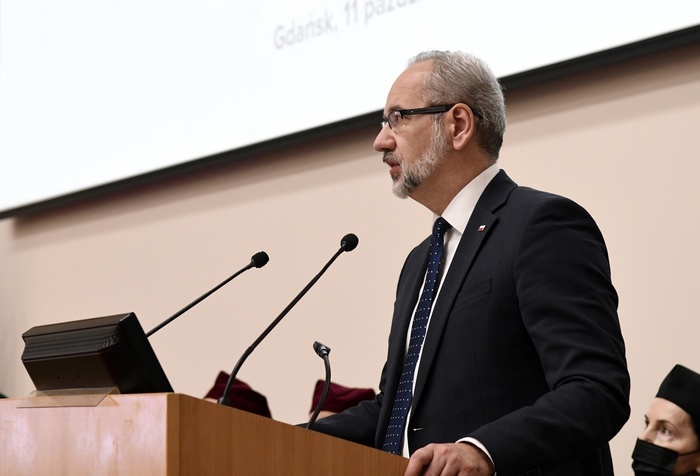 – I am glad that the year we are beginning today gives us hope for a systematic return to normality. These steps forward have been possible thanks to science and innovations, an example of which is the organization of treatment for people with COVID-19 practically overnight. The stamp of quality of the MUG and the UCC is visible on these efforts and deserves great recognition – emphasized Minister Adam Niedzielski.

Adam Niedzielski. The head of the health ministry also appealed to the academic community to fight for the truth. .

– We observe various crises. I am not talking here only about a health crisis associated with the pandemic, but I am also talking about a crisis of authority; a crisis that we see in such trivial and colloquial manifestations as the anti-vaccine movement, which, instead of knowledge, research, based on evidence, presents and offers us easy manipulation, superficial knowledge, simplifications, mental shortcuts, which lead to completely irrational conclusions. Referring to research, to facts, to conclusions of the scientific debate – this motto should guide us on our way to normality – said Minister Niedzielski.

President of the Republic of Poland Andrzej Duda also addressed a letter to the academic community of the MUG in which he emphasized that a university is a unique place where attitudes and opinions of young people are formed, hence the importance of openness to various points of view and the culture of debate. It is also a place for educating elites and passing on the academic ethos to young generations. 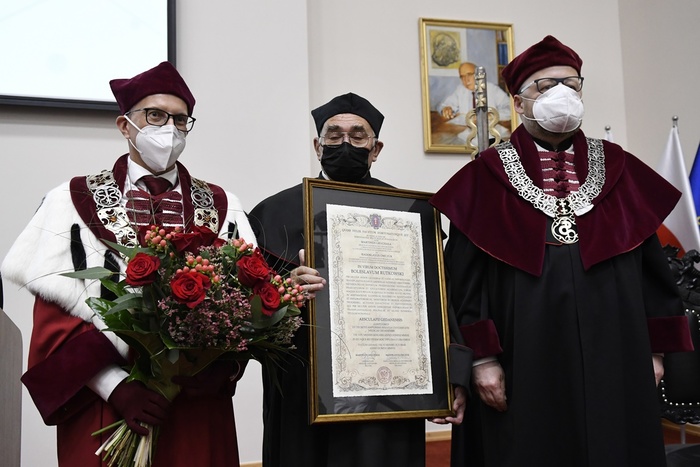 This year’s inaugural lecture Chronic kidney disease as a pandemic of the XXI century was delivered by Professor Bolesław Rutkowski, honorary professor of the MUG. Traditionally, the inauguration of the new academic year is accompanied by an exhibition prepared by the Museum of the Medical University of Gdańsk. It tells the story of the development of medicine and presents the beginnings of the MUG, the profiles of its distinguished staff, but above all the exhibits used by the University’s employees in the past. As its creators say, by telling the story of these objects they want to put aside for a moment what is nowadays important in the work of a doctor: comfort and precision of tool use. The exhibition will run in the Green Park space from October 11 to November 30, 2021.

The Medical University of Gdańsk, Polpharma Scientific Foundation, and Gdańsk Scientific Society were established in 2020. The Award and Medal of Prof. Roman Kaliszan, a world-class scientist, a specialist in pharmaceutical sciences, pharmacology, and analytical chemistry, rector of the University in 2005-2008. The distinction will be awarded annually to scientists holding at least a doctoral degree for outstanding scientific achievements in biomedical or biopharmaceutical sciences. The winner of the first edition was Professor Marcin Kołaczkowski, Head of the Department of Pharmaceutical Chemistry and the Department of Medicinal Chemistry of the Jagiellonian University Medical College, since 2016 the Vice-Dean of the PE for Strategy and Development. The Professor’s scientific work concerns broadly defined research on the search for new biologically active substances to obtain new drug candidates. This is interdisciplinary research, ranging from molecular modeling of biological targets and computer-aided design of their ligands to pharmacological studies. The most important scientific achievement of Prof. Kolaczkowski is the development of a new generation of central nervous system receptor modulators in search of therapy for psychiatric and neurodegenerative disorders.

Other distinctions presented during the ceremony were Primus Inter Pares awards, which were given to the best students of each faculty: Karol Steckiewicz Ph.D. (Faculty of Medicine, medical specialisation), who was the first in the history of our University to receive a doctoral degree while still a student, Grzegorz Piotrowski M.D. (Faculty of Health Sciences, environmental health and safety II degree) and Klaudia Kolodyńska M.D. (Faculty of Pharmacy, pharmacy).

During the inauguration medals of merit were awarded to Prof. Barbara Kochańska and Barbara Myślińska-Kawałko, M.D., and posthumously to Henryk Zawadzki Ph.D. for more than 20 years the supervisor of first-year students of the Faculty of Medicine.

More than 1,600 first-year students joined the academic community of the MUG, due to the epidemiological situation represented during the inauguration by five of them. They were welcomed by Dr. Habil. Tomasz Smiatacz, Vice-Rector for Student Affairs, who also read out the oath text. The Deans of each faculty presented the students with congratulatory letters and the Rector, Professor Marcin Gruchała, welcomed them as students of our University. The oath for doctoral students was conducted in a similar way, with the participation of Professor Jacek Witkowski, Director of the First Doctoral School of the Medical University of Gdańsk.

– We would like to welcome you among the community of the Medical University of Gdańsk, which in its actions is guided by the principles of mutual respect and kindness despite the differences between us, as well as the principles of freedom of speech, honesty and decency – said Vice-Rector Smiatacz to the students. – An extremely difficult academic year is behind us. During this time, the virus did not idle, so unfortunately it seems that also the coming year will be full of challenges. We will probably win the battle with the virus in the future if we reach for the eternal sources of success – teamwork, mutual trust, ability to listen, correct analysis of facts and foreseeing events. I wish you that despite all these difficulties, your stay within the walls of our University will allow you to develop your talents. 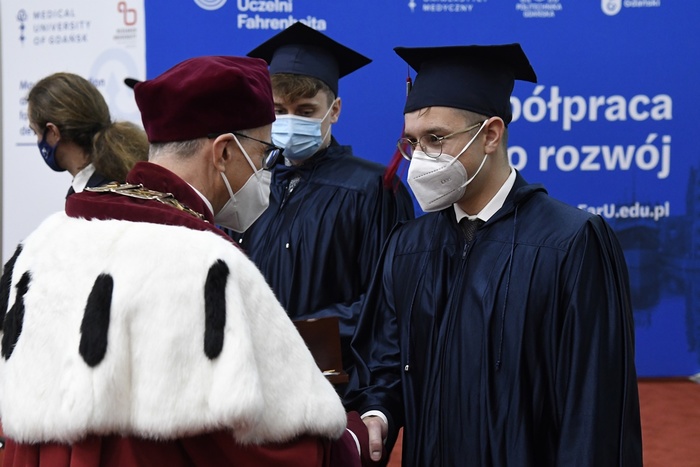