Daniel Fahrenheit Union of Universities in Gdańsk. Virtual meeting of the Rectors with the Minister.

Establishment of the Daniel Fahrenheit Union of Universities in Gdańsk is one of the most important events in the academic history of Gdańsk and Pomerania. The Minister of Education and Science, Przemysław Czarnek, who on March 12 talked about this matter with the rectors: Prof. Marcin Gruchała (MUG), Prof. Krzysztof Wilde (GUT) and Prof. Piotr Stepnowski (UG). The meeting was also attended by: the Director of Union, Prof. Adriana Zaleska-Medynska and Katarzyna Zygmunt, deputy director of the Union. 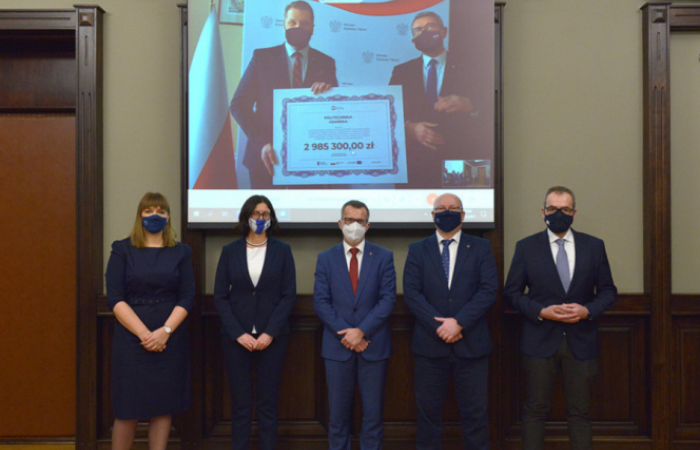 - Establishment of the Union of Universities in Gdańsk is an ambitious and necessary initiative – said Minister Przemysław Czarnek during the online meeting. – We intend to support the rectors of the MUG, GUT and UG in their pursuit of the main goal, which is the federalisation of the region’s strongest universities. I am convinced that the establishment of the Union and close cooperation of three Gdańsk academic centers will translate into an improvement in the quality of Polish science and higher education.

During the conversation, Minister Przemysław Czarnek and rectors of the leading universities in Pomerania discussed the assumptions of the Union’s activities and the development prospects of the universities united in it. The Minister virtually handed over to the Rectors a check confirming the co-financing of the Unions’s activities in the amount of PLN 2.98 million, which was obtained under the project Supporting universities consolidation processes co-financed by the European Social Fund, implemented under the operational program Knowledge, Education, Development.

- The establishment of the Daniel Fahrenheit Union of Universities in Gdańsk with the largest academic centers in Pomerania is another important step on the way to strengthening the long-term, successful cooperation between UG, GUT and the MUG – said Prof. Marcin Gruchała, rector of the Medical University of Gdańsk.

- Plans for the development of cooperation between universities within the Union are wide – added Prof. Krzysztof Wilde, rector of GUT. – Our most important, common mission is to build a strong academic center in Gdańsk. We want to strengthen relations with industry and business, build the economic strength of Pomerania, help in solving social problems of the region, and make the most talented high school graduates and young scientists choose Gdańsk as a suitable place to study and build a professional career.

- The conversation with the Minister allows us to assume that the way in which Gdańsk universities carry out consolidation activities within the Union of Universities was not only approved by the Ministry, but it also aroused real interest – said Prof. Piotr Stepnowski, rector of the University of Gdańsk. – I believe that the Union created by our universities will be a model project from which other universities in Poland will follow.

In the fall of last year, the Medical University of Gdańsk, Gdańsk University of Technology and the University of Gdańsk established the Daniel Fahrenheit Union of Universities in Gdańsk. The main goal of its creation is the joint building of the leading position of Gdańsk as an academic center in Poland and abroad, and the initiators of the creation of the Union, i.e. the rectors of the above-mentioned academic centers, emphasized after establishing the cooperation that the Union opens the way to the future federalization of the strongest universities in the region.