emblem of Daniel Fahrenheit Union of Universities in Gdańsk

The most important task of the Union will be the best use of the resources and possibilities of all three universities, which could create one academic center in the future through joint activities. It would be in the top three largest in the country (next to Warsaw and Kraków), which in turn would translate into better recognition of academic Gdańsk in Poland and abroad, as well as greater opportunities for development and obtaining funds.

The strongest Gdańsk universities intend to entrust the Union with the development of assumptions and possible scenarios of the so-called federalization of universities and their further integration. The Union will also handle the implementation of joint research projects on an international scale, coordinating joint research and development works, or establishing new, inter-university initiatives (e.g. in the field of education). The Union is also to strengthen the publishing activities of GUT, UG and MUG.

One of the strategic objective of the Union will also be to conduct a common promotion and ranking policy, especially in the international scale, as well as expressing opinions and representing common interests towards state and local government administration and legislative initiatives.

The MUG, GUT and UG has been cooperating for years in the fields of science, education and organisation. Since 2005 universities have collectively carried out over 30 scientifical and research-development projects for over zł 270 millions. They arso pursue a number of intercollegiate fields of studies which allow students to get a knowledge from pundits in various domains (i.e. Medical and Mechanical Engineering at GUT and MUG, Space and Satellite technologies at GUT and UG, Biotechnology at MUG and UG). Moreover, MUG and UG pursue Intercolegial Faculty of Biotechnology. Thanks to estabilishment of the Union of Universities it will be possible to enhance this cooperation and create in Gdańsk one of the strongest academic centres in Poland.

The Union’s governing organ will be the Assembly consisting Rectors and Heads of Faculty Councils. First chairman representing the Union will be until the end of 2022 prof. Krzysztof Wilde, Rector of the GUT and in following terms Rectors of the MUG and UG. Management of the Union of Universities wil be the domain of Director of Union – during meeting of Assembly of the Union on 10th of December 2020 this function has been entrusted to prof. Adriana Zaleska-Medynska from the University of Gdańsk, while Katarzyna Zygmunt from Gdańsk University of Technology became Director’s Deputy.

Daniel Fahrenheit Union of Universities in Gdańsk will have its headquarters in the building of Centre for Knowledge and Technology Transfer of the Gdańsk University of Technology at Al. Zwycięstwa 27.

Rectors of MUG, GUT and UG on the establishment of the Daniel Fahrenheit Union of Universities in Gdańsk

The Medical University of Gdańsk is a university that guarantees education at the highest level, as well as an important research center with internationally recognized scientific activity. MUG is one of the leading Polish universities, distinguished with the prestigious status of Research University. By establishing the Union with the largest academic centers in Pomerania, we are taking another, extremely important step on the way to tightening the long-term, successful cooperation between our universities. I am certain that by exploiting our mutual potential more intensively and effectively, we will soon be able to successfully compete with the best academic centers in Europe and in the world.

Our most important, common mission is to build a strong academic center in Gdańsk. Thanks to the inclusion of our universities in the ministerial program “Excellence Initiative – Research University” and the fact that the MUG and GUT received the status of research universities, we now have more opportunities for dynamic development. We want to build a new quality in Polish science, strengthen relationships with industry and business, and make the most talented high school graduates and young scientists choose Gdańsk as a suitable place to study and build a professional career. 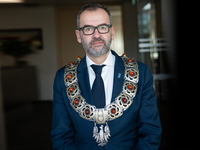 This is the best moment to integrate our universities. First of all, Gdańsk universities have performed excellently in strategic competitions both in Poland and in the European Union. All three were included in the “Excellence Initiative – Research University” program. The international panel of experts of this program expressed the expectation that it was Gdańsk that would be an example of creating an integrated academic center. Secondly, we are the undisputed leaders of the Foundation’s International Research Agendas program. Finally – the program of the European Universities of the EU and the University of Gdańsk won in the first competition as one of only four qualified Polish universities. Therefore, I believe that we can compete with traditional Polish academic centers in Warsaw, Kraków and Wrocław.

It is a great distinction and obligation towards the three largest universities in the Tri-City. I will use my knowledge and skills to work for their integration, and tightening cooperation between universities, including in the field of management systems and conducting research and development works, should bring universities closer to each other so that these processes are perceived by the academic community as beneficial processes, both organizationally and financially, and in the longer term leading to increasing the prestige of the university on the international forum. My first challenge will surely be the efficient implementation of works related to the assessment of the university’s consolidation potential, and then the coordination of works leading to the development of solutions enabling the consolidation of the university.