The academic year 2020/2021 has officially started

Nearly 1 650 1st year students started their education at the Medical University of Gdańsk. The ceremony also launched the celebration of the 75th anniversary of our University. Due to the epidemic situation, the event was organized in a smaller group and the whole event was broadcast via the university’s social media.

The ceremony began with the Rector’s traditional speech. Professor Gruchała emphasized that the MUG is one of the leading public universities in Poland and the best medical school in the country. A university whose high scientific, research and development potential has been appreciated by an international group of experts, placing the MUG in the prestigious group of 10 research universities.

- I am proud of the testimony that our employees, students and doctoral students have given in the face of an unknown and dangerous disease in recent months. Thank you for showing a professional and mature attitude in this exceptional situation, standing on the front lines of the fight against the epidemic – said prof. Gruchała. – With your commitment and selfless willingness to help, you have passed the most important test of responsibility for another human being, serving human health and life regardless of circumstances.

In addition, the Rector recalled the valuable initiatives of members of our University community and medical entities undertaken during the pandemic, which included, among others: the creation of the first COVID-19 Test Centers in the country in the drive-thru form, the establishment of the SARS-CoV Molecular Diagnostics Laboratory at University Clinical Center and commitment to help patients infected or suspected of being infected with coronavirus, high-class specialists from the University Center of Maritime and Tropical Medicine in Gdynia, University Clinical Center, Family Medicine Center and University Dental Center.

The Rector of the MUG emphasized in his speech that in the scientific community, especially among members of the medical university community, it is unacceptable to deny the existence of the SARS-CoV-2 virus and the pandemic it causes. It is also reprehensible to disregard the current recommendations regarding the use of methods and means of protection against infection, the effectiveness of which has been clearly confirmed by the most serious authorities in the field of medicine, virology and epidemiology. We are an university that carries out its mission based on reliable medical knowledge and reliable scientific evidence. We cannot succumb, let alone promote, false and socially harmful content – said prof. Gruchała. – For the sake of our own safety and that of others, we should behave responsibly and prudently, remember to keep a distance, wash and disinfect hands frequently, and properly use mouth and nose covers. These seemingly simple actions can protect us against the possibility of infection and its dangerous effects. In Rector Gruchała opinion, a significant step in the creation of the Gdańsk academic center is the establishment of the Gdańsk University Association of Daniel Fahrenheit together with the University of Gdańsk and Gdańsk University of Technology.

- Strengthening our existing good cooperation will allow even more intensive and effective use of the mutual potential in the field of scientific, research, teaching and development work. I am convinced that thanks to such decisions we will soon be able to successfully compete with the best academic centers in Europe and in the world – the Rector emphasized. A symbolic meaning, related to the construction of a strong, integrated and competitive European academic center in Gdańsk, was the recent ceremony of awarding honorary dignities to the first Rectors of Pomeranian universities democratically elected after the political changes that took place in Poland in the year 1989. Honorary doctorates of the University of Gdańsk were awarded to prof. Stefan Angielski – the Rector of our University in the years 1990-1993, prof. Zbigniew Grzonka – Rector of the University of Gdańsk in 1990-1996 and prof. Edmund Wittbrodt – Rector of the Gdańsk University of Technology in the 1990-1996 term.

Concluding his speech, prof. Gruchała thanked the entire university community for entrusting him the responsible function of the Rector of the Medical University of Gdańsk for the next four years. Employees, students and doctoral students were invited to participate in the educational and information campaign, which started with the new academic year, called Culture of Respect. It aims to strengthen the atmosphere of mutual understanding, equality and empathy in the university environment, preventing any form of discrimination.

- It is extremely important not to tolerate, activities bearing the hallmarks of harassment, mobbing and intolerance in the university space. By definition, a university is an unique forum for the exchange of ideas and experiences, discussions and often clash of views. Regardless of what divides us, we must be able to listen and talk to each other, with respect and understanding for others- emphasized the Rector of the MUG.

Wishing the students a lot of professional success and all the best in their personal life, the Rector announced the official start of the 2020/2021 academic year.

After the Rector’s inaugural speech, President of the Republic of Poland Andrzej Duda’s letter was read by prof. Edyta Szurowska, Vice-Rector for Clinical Affairs. Traditionally, the inauguration was accompanied by the presentation of state and departmental decorations, preceded by a speech by the Pomeranian Voivode, Dariusz Drelich. The Primus Inter Pares award ceremony was conducted by the Vice-Rector for Student Affairs, Tomasz Smiatacz, M.D.,Ph.D.,D.Sc. This year, the best three graduates were awarded: Zofia Lasocka from the Faculty of Medicine, Sandra Kałwak from the Faculty of Pharmacy, Sylwia Czaja Stolc from the Faculty of Health Sciences. The following guests also took the floor: prof. Jacek Witkowski – director of the First Doctoral School of the MUG, representatives of students, doctoral students and graduates. On behalf of the alumni a few words to the MUG community were sent by Dr. Brown Chigadu Kamanga from Zambia and Dr. Maria Morales Bayona from Peru.

On the occasion of the inauguration of the new academic year, apart from many occasional letters received by the University, we were able to listen to the wishes of the honorary guests. The message to the MUG community was sent by: Józefa Szczurek-Żelazko – Secretary of State in the Ministry of Health, Mieczysław Struk – Marshal of the Pomeranian Voivodeship, Aleksandra Dulkiewicz – President of the City of Gdańsk and prof. Piotr Stepnowski – Director of the newly established Universities in Gdańsk Association.

Extremely interesting and inspiring inaugural lecture entitled Lesson of COVID was delivered by Tomasz Smiatacz,M.D.,Ph.D.,D.Sc., Head of the Department of Infectious Diseases, provincial consultant in the field of infectious diseases.

Thanking everyone for their presence, Rector Gruchała recomended visiting the online special exhibition at the MUG Museum entitled Snapshots from 75 years of the University. He also encouraged to read the jubilee publication entitled The Medical University of Gdańsk are People, the inaugural issue of the MUG Magazine, and to listen to the latest album of the University Choir. The ceremony ended with the singing of Gaudeamus igitur by the Choir of the Medical University of Gdańsk under the direction of Błażej Połom, Ph.D. 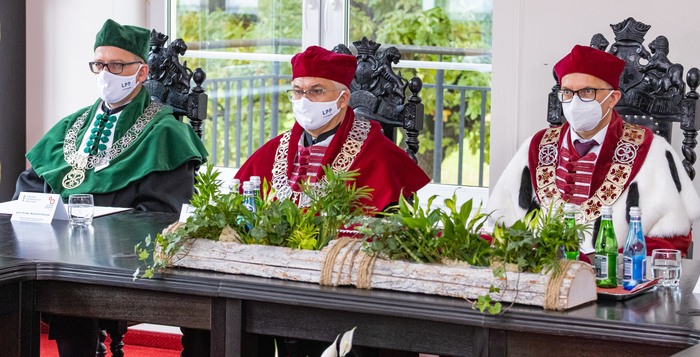 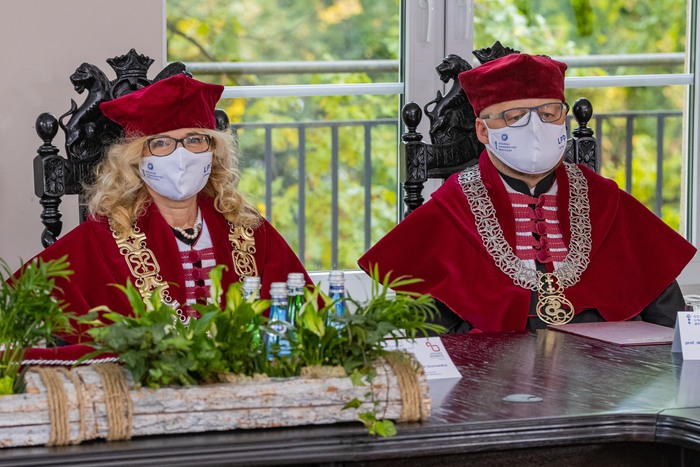 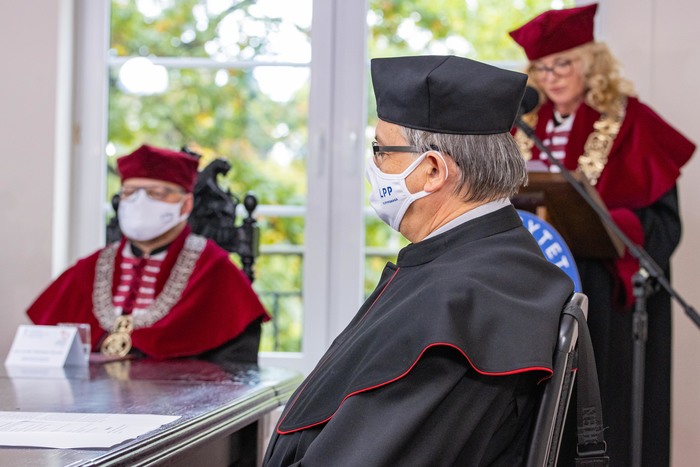 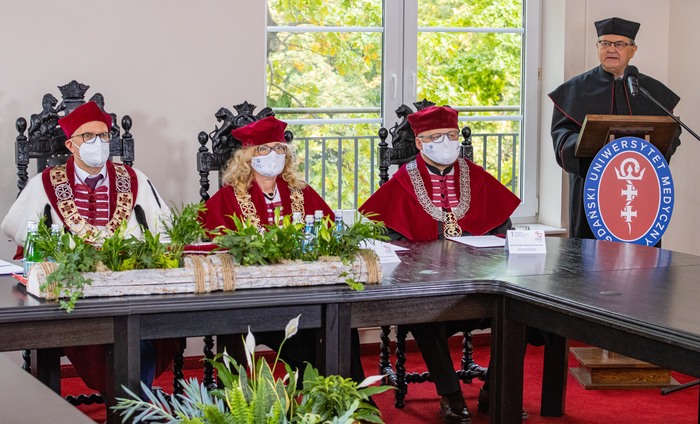 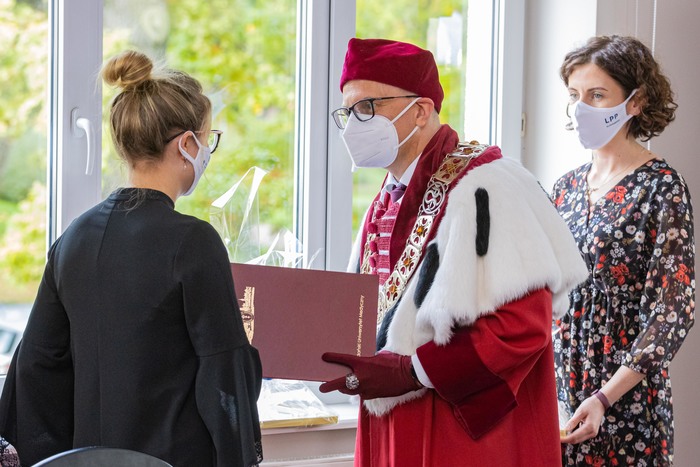 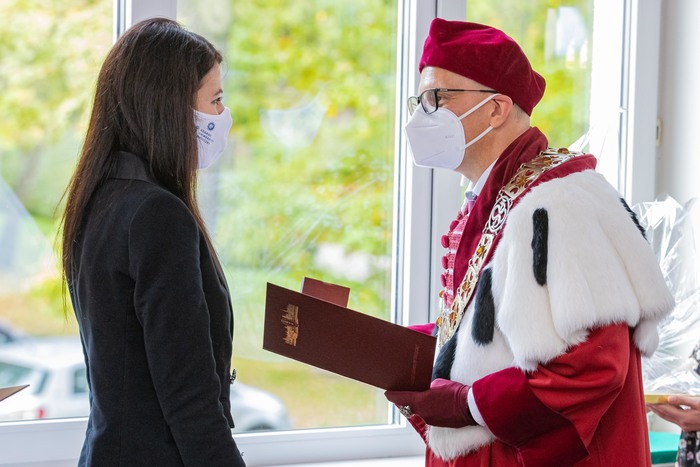 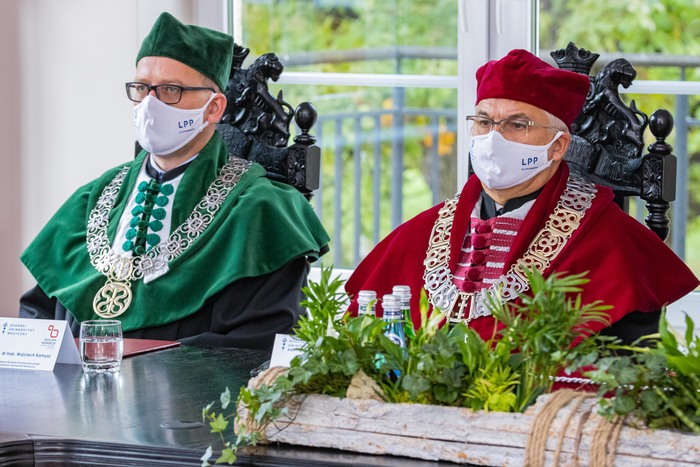 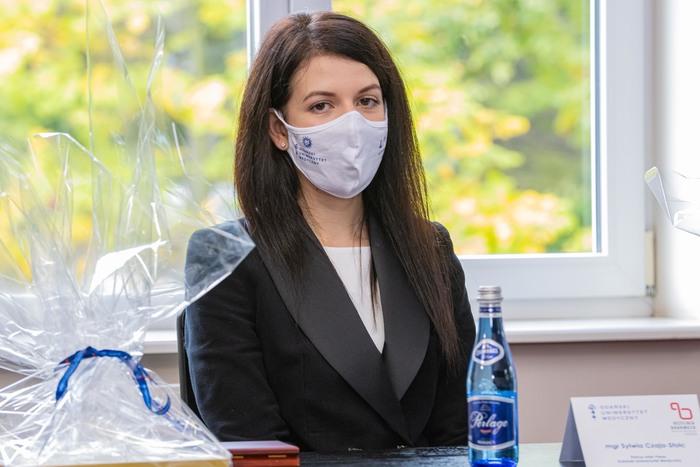 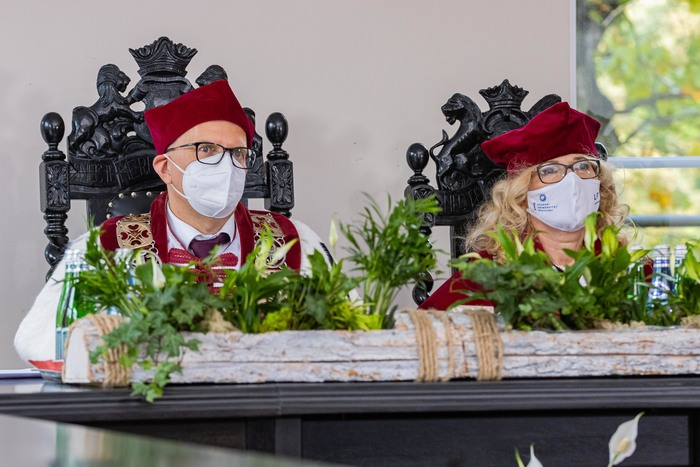 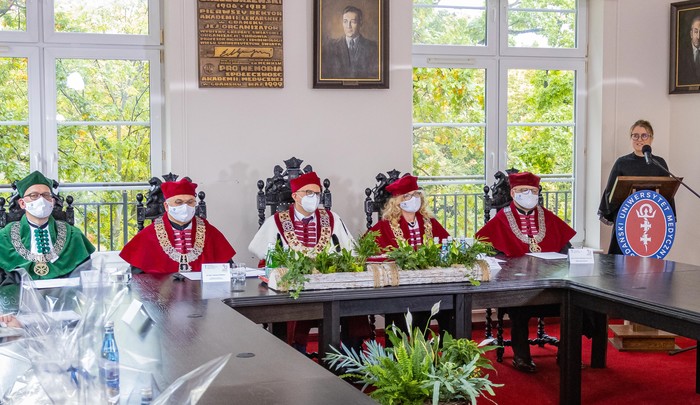 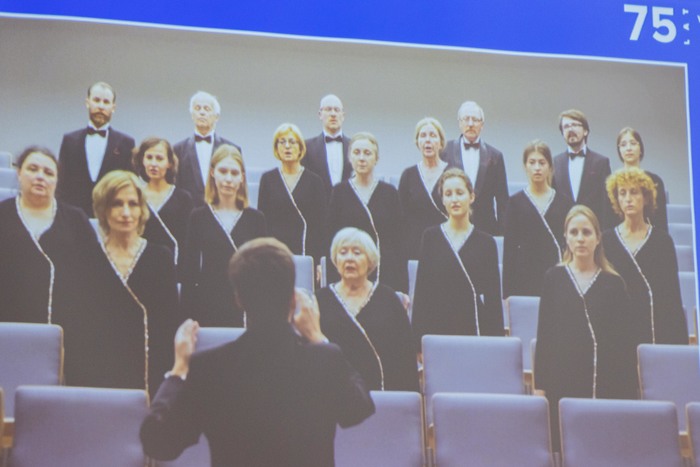 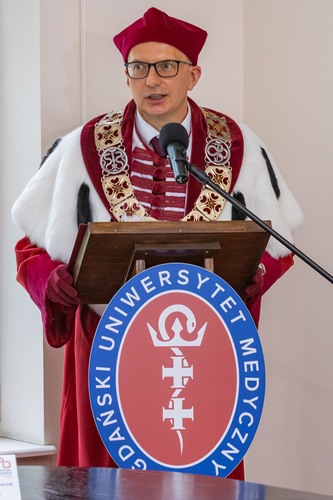 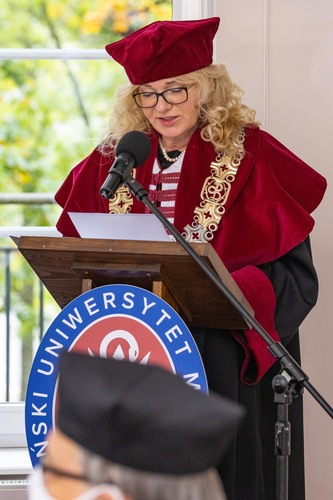 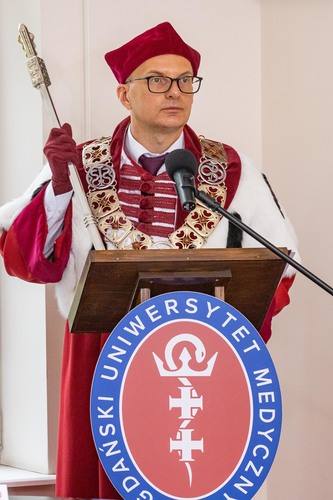 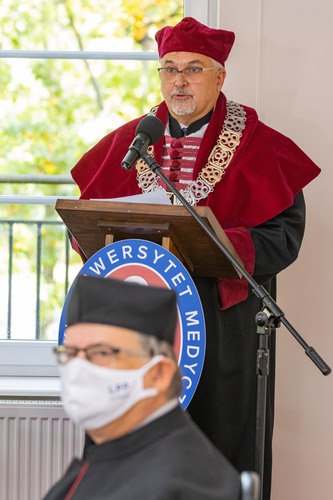 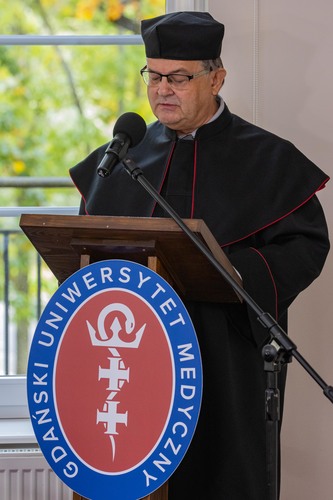 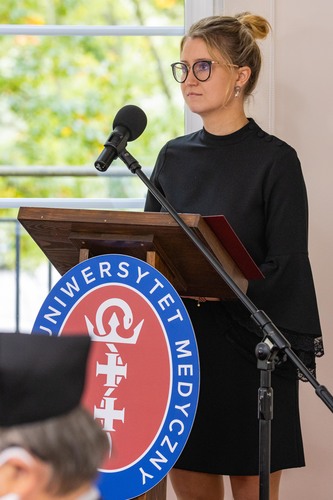