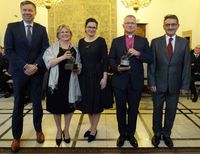 Prof. Małgorzata Myśliwiec, the head of the Clinic of Paediatrics, Diabetology and Endocrinolog at the MUG was granted the Jan Heweliusz Scientific Award 2019 in the natural sciences category for her outstanding for outstanding scientific achievements in the diagnosis and cell therapy of children with type 1 diabetes in the early stages of the disease. Professor Myśliwiec is the first woman to be honoured the Heweliusz Award in that particular category. The laudation in honour of the Laureate was given by Prof. Krzysztof Narkiewicz, head of the Department of Hypertension and Diabetology the MUG and the Vice President of the Department of the Polish Academy of Sciences in Gdańsk. The award ceremony was traditionally held on January 28th at the Main Town Hall in Gdańsk, on the anniversary of Jan Heweliusz’s birth.

Established in 1987 the Jan Heweliusz Award is the most prestigious scientific award in Pomerania. It is granted by a jury a jury consisting of the presidents of the Polish Academy of Sciences in Gdańsk and the Gdańsk Scientific Society, rectors of state universities in Gdańsk, a representative of the mayor of the City, current laureates and representatives of Gdańsk private universities.