The ceremony of awarding the title of the Honorary Professor of the Medical University of Gdańsk to the late Professor Roman Kaliszan, DPharm, the rector of our University in the years 2005-2008 will take place on June 17th 2019 at 11:00 AM in Auditorium Primum, Atheneum Gedanense Novum building, al. Zwycięstwa 41-42.

In this unique way, the MUG community would like to honour not only the dean of the 2005-2008 Rector’s Degree, but also an eminent scientist and academic teacher. The laudation will be given by prof. the chairman of the Council of the Faculty of Pharmacy for the dignity of “Aesculapius Gedanensis”. The musical setting will be provided by the Choir of the Medical University of Gdańsk. 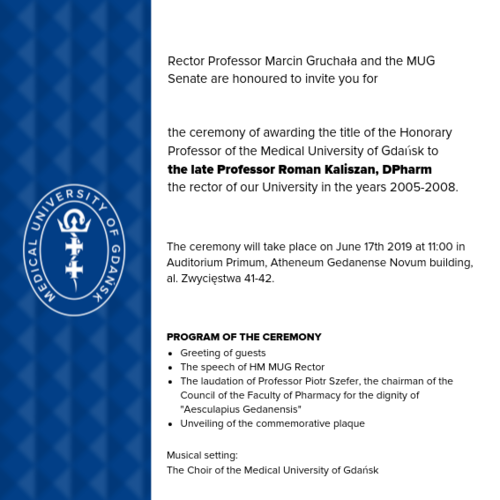