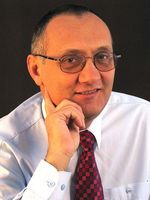 Prof. Jacek Jassem (MUG Department of Oncology and Radiotherapy) won the MISTRZ (CHAMPION) competition and was awarded a grant of nearly 300000zł (~71500€) to complete the project “Prognostic and predictive signifiance of microRNA in colon cancer”. Fundacja na rzecz Nauki Polskiej (Foundation for Polish Science) awarded research grants to 8 professors of life and earth sciences. Besides prof. Jassem, among the recipients is prof. Jarosław Marszałek from the UG-MUG Intercollegiate Faculty of Biotechnology for his project “Involvement of mitochondrial Hsp70/J-protein chaperone system in iron-sulfur cluster biogenesis: molecular biology and evolution”. The award ceremony will take place on September 22nd in Warszawa and its highlight will be a lecture by prof. Robert Huber, recipient of the Nobel Prize in Chemistry („How I became a Scientist and Protein Crystallographer”).

The MISTRZ program began in 2008 and is aimed at scientists with substantial research achievements and success in working with young research teams. The goal of the program is to support exceptional researchers with 12 to 36 months of funding that will allow them to intensify their ongoing work or to begin new projects.

A group of expert scientists nominated by the FNP invites candidates to participate in the contest. Those candidates who accept the invitation submit their research proposals and cost estimates showing the use of FNP funding. The Board selects the recipients based on the expert opinion.